In this post I share my thoughts on the multi-FX pedals from the beginner point of view.

So you think of a multi-FX. Why? Perhaps because everybody is talking about them, perhaps because you cannot afford all the pedals you may want or whatever other reason. And then which one you should buy to start with? Hereby my experiences on a couple of pedals, what I like about them and what I don’t. Hopefully this would help somebody else as well.

What is it about

So a multi-FX (pedal or desktop variants) is a sound processor which allows modelling different (hence multi-) effects, often combined in a chain in fixed or any order. You can define the order, individual effect parameters and switch them on and off on the fly, although some units only give control over switching between whole sets, which have pros and cons, read below. Such multi-FX can be used in a combination with a guitar amplifier often on a “clean”, so no additional distortion applied, setting or channel. The guitar goes into multi-FX and then into an amp. More advanced versions of multi-FX also provide “effects loop” inputs/outputs, allowing to put the multi-FX (or part of the defined chain) into the effects loop of the amplifier. You want this for effects like reverb, echo, chorus as they are best applied after the pre-amp section of the guitar amplifier. While this is a common practice, there are no hard rules and some guitarists mix and match. Finally it is what you like, not what somebody tells to do!

Step further are the multi-FX that also model (simulate) amplifiers and speaker cabs. These are more versatile and can be connected directly to the (active) speakers (or, rather, PA, which stands for “Public Address”, including the whole chain from mics to speakers) without the need for an actual amp, which would need to be either loud enough or mic’ed into the same PA. This saves tenth of kilo’s of weight and a lot of space when travelling, but you obviously need a venue with speakers. When connecting to PA having XLR (balanced) outputs is often preferred as it can translate signal to long distance without issues and often cables are available as they are used to connect microphones. Phew.

Well, what you most of the time want as a beginner is a good starting point to practice, learn what different effects do and try go get close to the sound of your favorite artist. For most of those things even simple multi-FX units would be good enough 99% of the time, but we all have GAS (“gear acquisition syndrom”), so of course we would spend more time researching than playing. I hope with this article you’d spend less and start practicing instead :).

Which multi-FX to get

Well, I bought my first multi-FX without knowing what it is and without even trying it in real life (I will consciously skip my very-very first Line6 device which didn’t get even an hour of playing over 10 years or so :)).

I was looking for a… looper and while eyeing nice one from Boss (RC-30 if you want to check it out), last minute I saw a “weird” device from Zoom which could do looping as well. I have bought it on a whim without having second thoughts. Actually upon arrival I wasn’t impressen either with the interface or the sound of it, let alone the looper. So the device (Zoom G1Xon) was left collecting dust for about a year. By that time I have accumulated some more gear and was looking to expact even further, so I started research and came after that the good ol’ Zoom may deserve another look.

This brings me to the main disappointment about many multi-effects is that the initial presets are rather… useless. They exaggerate the effects and provide “outmost” combinations for showing off rather than more subtle but usable combinations. So many times (there are exceptions!) you want to start with an empty preset and start building your own thing. More on that later, but doing so you much more likely end up with the sound you like and start enjoying it instead of dumping.

So when starting I would NOT go for an expensive one. I have performed some research on the “under 500 eur” options with two exceptions:

I only included the “pedal” versions, although there are also desktop versions. I explicitly wanted to have a “pedalboard” variant to learn play with pedals and not interrupt playing to press buttons, but some people perorm desktop variants like Boss GT-001 (if you’re into the Boss/Roland sound).

My final choice went to Zoom G3n although I was really about to go after Mooer GE200. Many comparison videos on Youtube (and comments on them) were actually preferring Zoom. The final choice went for a used Zoom for a very reasonable price as my “music budget” was already stretched way too far with all other nice things I wanted to try. Actually since these things are often bought to “try”, a used one may be an excellent option. After all you can always sell it further to the next guy in the “food chain”, but without loosing that much as on a new one anymore. 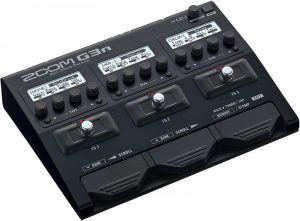 Note: the Zoom devices on the list are actually rather old pieces of technology, but sound-wise they are really standing well except when put against the high-end devices, but those cost times more (even used) than Zoom. Unless you have endless budget and cannot stay some particular things in cheaper devices I would not start with the top-of-the-lines ones.

My choice for Zoom was dictated also by going for a “known reputable brand” with good track of record in support, good references, compact size and availability on second-hand market. Other than that it is difficult to pick really bad device, most of the time the budget limits the choice.

A small warning: some multi-effects are advertising bluetooth/iOS/Andriod connectivity, but I would rather avoid those. You’re at a mercy of the manufacturer to provide updates to the corresponding application. And when they stop or you upgrade your phone to the latest OS you may see your musical device to become a pretty blinging brick which you’re not able to control. Yes, I tend to like “classics” including rotary knobs and push buttons, but this may be a life saver for the future use.

So what you in general get is a number of (simulated) effects that you can try and tweak to your liking. Getting a hundred of real pedals is way more expensive and not practical. On the other hand, experience shows that you do NOT use all effects and simulations available in the unit, but try many and finally stick to several. You may put some time into tweaking, but after all, you want to play! So you will find the sounds you like (still for a fraction of the price, just check what those amps cost!) and play with those.

I love having the drum patterns (so much more fun than a metronome!) and a looper. Since there is (at least one) display on multi-FX units, you get feedback on the time and where you are in the loop. Over the time this shouldn’t be needed, but as a beginner it really helps to understand where you are in the loop. Typically about a minute looper is good enough to start with, less may be rather limiting.