In this article I review of several tuner pedal models (and some others too!). See the first part of the article for the introduction on the tuner pedals.

Over the years I happen to own several tuners. Hereby I would like to give a quick comparison of several tuners to give an impression over the differences and what you can expect. Good luck making your choice!

See also the list of all pedal tuners in our gear catalog! 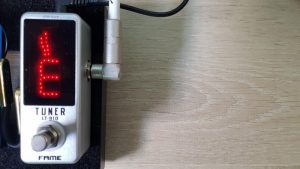 A budget-friendly tuner in a mini-pedal format. One of the cheapest options (around 20 eur) for the actual pedal tuner. Also sold under other brands (“Fame” seem to be “trademark” of the German Music Store) and looks very similar to the more expensive Mooer Baby Tuner.

It is a very compact pedal in sturdy aluminium casing, with a nice large display and just one footswitch to toggle between the tuner (silent) and pass-through mode. The switch is rather “clicky”, requiring some pressure to get switch down and producing a rather pronounced “click” sound. The display is large enough to read, but in my opinion it has a couple of disadvantages: 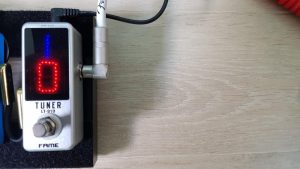 A small remark (not truly a disadvantage): while the device requires a power supply you need to buy one yourself, it does not come with one. There is also no way for battery operation (normal for most of the mini-sized pedals).

Bottom line: if you on a budget and want an easy to use tuner pedal, you can’t go wrong with this one! 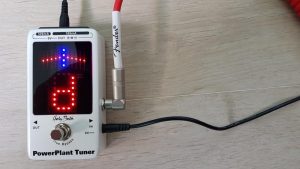 A full sized pedal with eight power outputs that may power your entire pedal board! The “Harley Benton” brand is exclusive to the German Thomann. They are selling many budget-friendly options with features often not found in that price segment. The PowerPlant Tuner is one of them.

You get a full-sized pedal that does come with own power supply and can it its turn power 6 9V 100mA units and 2 9V 500mA units (cables for inverting polarity included!), which will be more than enough for most of us. In my experience the power supply is noise-less, and for the format and the price just above 50 eur it is a a great bargain. As in the Fame LEF-910 the switch is both “heavy” and “clicky”, but with a lower (“meaty” if you want) click sound.

On the tuner side it has a large and easy to read display. Just like the Fame LEF-910 it uses red and blue colors, but the blue is on the bright side, so no issues with reading in a sunlight. It may be even too bright in the dark, but you will only see it when engaging the tuner mode.

Bottom line: if you only (plan to) use pedals with 9V power supplies you can build the rig around the Harley Benton PowerPlant and get a descent tuner for free! 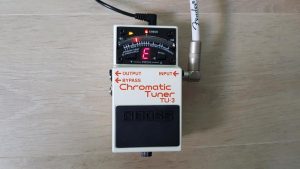 A full sized pedal from a solid brand. TU3 has a number of options for tuning not found on other pedals: drop-tuning, 6- or 7-string guitars, chromatic or guitar/bass modes (tune by string number) and it has an extra output for powering chained (up to seven!) pedals totaling 200 mA (although less than what Harley Benton PowerPlant can do) when using the Boss PCS-20A daisy chain. Like also the case with the other Boss pedals, the build is rock-solid and it can work on both power supply and a 9V battery (like many other Boss pedals).

It is not a true bypass though, it has a buffered output, meaning it may be better for those running long cables but your sound will not go directly through the pedal. Most of beginners won’t notice, but in case you care, take it into account.

On the practical side the tuner seem to be rather “nervous” (indicator jumping left and right) compared to other tuners, so tuning will require a bit more time but may result in a better accuracy. The display is very easy to read and has an “extra bright” mode may you need this in an outdoor gig.

Bottom line: solid investment that is likely to outlive many other pedals, but consider other options as well! 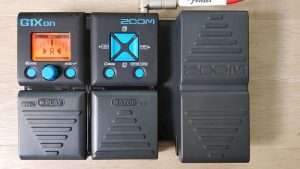 As many other multi-fx units, the Zoom G1Xon has built-in tuner next to the many other built-in effects (on top of all other nice features, making it really hard to beat for the price!). The tuner is easily engaged by pressing both footswitches simultaneously, which also silences the signal. The tuner is rather easy to read and overall gives good results, although the resolution is rather rough with only several “segments” indicating the accuracy. The tuner is actually pretty advanced and has several operation modes: chromatic, guitar (6 or 7 strings), several open ones, drop-tunings and DADGAD. You can also select the reference pitch (in Hz). I had no problems with the tuner not being able to recognize the strings. Tuners in the higher placed models like G3n have more a bit finer resolution, but further provide similar functionality.

Note that the aging G1Xon is replaced by the Zoom G1X FOUR, but you can always spot a used one in mint condition for little cash. Newer versions may have upgraded simulations, but in general the quality of the simulations is hard to beat for the given price!

Bottom line: cheap and functional “all in one” solution, hard to beat for the price and total package, but may be too “rough” for some. 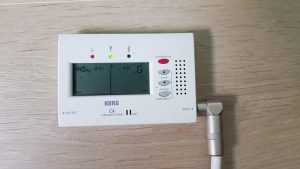 While technically not a pedal, Korg CA-40 (and the likes) may be the most versatile solution for both acoustic and electric instruments. The tuner has a large really easy to read display (except in the dark, it is not backlit!). You can alter the reference pitch if you want, but in most cases you just start and tune. For acoustic you would use the built-in mic and for “cabled” instruments you can plug-in the the cable. You can also tune by ear by letting the device produce reference sound. None of the pedals that I know of can do that!

While it is battery powered, the single AA battery is good for months, so no worries about that (and you can get those batteries everywhere).

An interesting application may be in a combination with an amp that has a dedicated output for a tuner (like Harley Benton AC60 Pro).

Bottom line: cheap and a rather universal solution if you’re not after a “real pedal”.

Different tuners target slightly different applications. Most of people would be happy either with Korg or Fame-like models. More advanced users or ones with several pedals will likely look at the Harley Benton or Boss for more functionality and solving the need to feed all pedals from single source (and still on budget). Finally users of the multi-fx units starting from the cheapest Zoom units will get a lot in the package including descent tuner unless they have higher demands for tuning accuracy.

Interestingly enough when switching from one pedal to another may result in “not well tuned” readout, which basically means the devices are not producing the same result. More accurate ones will require more “fiddling” with tuner pegs to get things right, less accurate ones will give you blue light earlier, but may result in a less accurate tuning. Your ears will have to decide what is “good enough” for them.

Your take on this? Any suggestions? Ideas? Share below!

See also the list of all pedal tuners in our gear catalog!

This post contains affiliate links to the Amazon and Thomann websites. I will receive a small fee if you buy one of the products which will help me supporting this website. I appreciate your help!

I just made a hole in my guitar… and I love it!