This post was originally published in February 2019, but reposted here to consolidate all materials in one place.

So it already a year ago that my short illness inspired me to rethink my “time investments” and to decide “once and forever” to pick guitar again. Perhaps a good time to think back and reflect on the past year.

This is the most important part of course. Thanks to the unbelievably well made Yousician app (disclaimer: I am a paying customer, I don’t get any royalties by referring to them) I kept practicing a couple days a week, which is a must in order to make progress. And I should say I do see (or shall I say hear :)) results. I was struggling with first levels of Yousician, but now I am level 7 (and going further) with getting more and more musical pieces out of my guitar(s) enjoying every playing session. This was money well spent I should say.

So how much to I practice? Well, at least 3 days a week is a must to have for progress. I have started with 15 minutes (natural limit until my fingers started to hurt too much) and I set minimum to 30 minutes nowadays, with some extra time devoted to songs (not going very well yet), scales (could be much better :)) and some random pieces from numerous books and guides acquired over the year. 3 days a week (and sometimes more) leads to some measurable (in terms of less mistakes, being able to play more complex passages, etc) compared to anything less. With more difficult pieces I am more often playing the same things for a couple of sessions before even trying to play full piece at full speed (another nice feature of Yousician).

As for calluses – they would go away if I would stop practicing (old skin would just come off). I don’t use picks anymore to keep them “in shape” as regular practice give enough “push” to keep the thick parts on. I did start feeling fingers most prominently when learning some basic jazz chords – I couldn’t relax and push with fingertips pretty hard to keep the strings ringing. That was really good practice. After several days pushing to get through that (very basic) jazz piece I had to stop and let fingers “come back to normal” before starting again. BTW, on the right hand I have started growing nails a bit as fingerpicking is so much better with fingernails (OK, at leas to me), but you have to take care of your fingernails properly. It is an odd feeling of having fingers on both hands “asymmetric”, but you forget about it at the moment you grab a guitar. 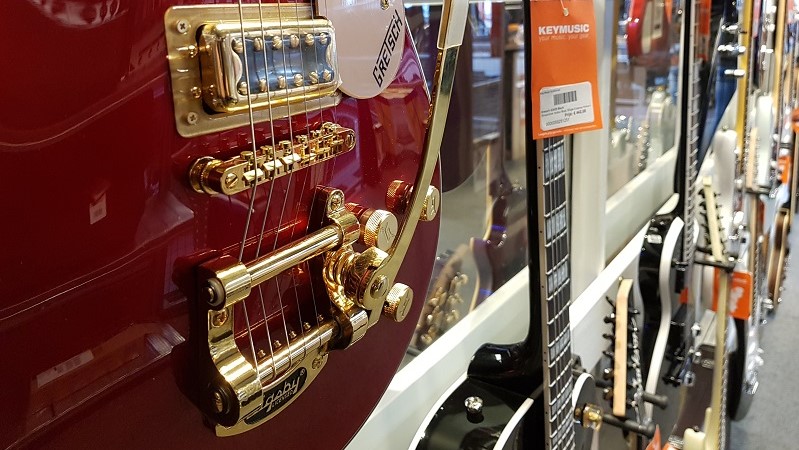 OK, this is where it almost goes wrong, but I am a very gear-gathering person. Give me unlimited resources and I would buy them all… Well, almost all :). But luckily (or not) my financials are limited and so does the space in the house :). So I managed to acquire only a couple of guitars with the (second hand) Fender Strat (MiM, I love sunburst color scheme!) being my favorite at this point. Perhaps it was setup in a good way, may be also having .009 strings also helped to “ease the pain” (BTW, I tried Ernie Ball Super Slinky 3223 and I love them, although I have started with D’Addario and still have them on other instruments).

In addition I have got myself the infamous Hotone Mojo Diamond and I can’t play enough with it. Since I can turn on the bigger speaker-amp at most once a week for the rest I am bound to headphone and the little amp is just so unobtrusive and always ready to rock on my desk. Really great idea. Other HotOne models are on the list too, but birthdays are not coming every month :). I have even “modified” (=almost destroyed) an old amp (had it “for free” with Strat) to make it a cab. Had to remember how to solder and made proper holes (was not as nicely done as planned). But hey, it is functional and I can sleep well without keeping thinking about it :).

Of course I could not stay away from pedals, but for now I stick to a simple one-button looper and a (second hand, people sometimes sell stuff without using it) Boss OD-3. I still want my Boss Blues Driver which I was promised as a New Year present, but never got to me… So I use the small-but-mighty HotOne Blues pedal (not on sale anymore). Really cute and nice sounding (to my ears). Of course these guys require some cabling and I seem to live with the motto “there cannot be too many cables”, so every visit to a music shop results at least in one additional cable.

To make the list complete I have Dunlop Ultrex Jazz III picks for solo and Fender thin ones for strumming almost in every room and pocket “just in case” :). I love the Ultrex’es and for strumming any reasonably thin picks would work I guess. Many times I just strum with fingers and that sometimes saves the ears of surrounding people as well.

Internet / Youtube is full of inspirations (but also a great source of distructions, so use with care!). While I am still a big fan of justingutar.com, I also spend time looking for other examples. I love the jazzguitar.be resource preparing to step in to the wonderful world of jazz, the videos of Paul Davids (really nice and talented Dutch guy, check his YouTube channel). Youtube is kind enough to suggest numerous other videos with similar content. I also like the Guitareo resource. Last but not least I have also bought a couple of books form the Hal Leonard series and the ones by Joseph Alexander, but I used those mostly to get familiar with the “jargon” and theory, but couldn’t get myself really getting through the material other than reading it. Somehow the books are much less “live” in this case than videos or direct feedback I am getting from e.g. Yousician when playing. Everybody is different and may be books would work better for you.

What works best for me is to watch and read through different explanations on the same topic, look at things from different perspectives. Eventually the mumbo-jumbo becomes a reasonable systematic piece of knowledge with the small bits falling into their place and suddenly the long chord names start to make sense and becomes recognisable :). It takes time, sometimes you just have to listen and absorb before getting to the actual understanding. The jargon shall become second nature, then the brain is much more inclined to get to the actual message behind. It is very interesting how it works :).

So a year later I am definitely not where I want to be, but I do enjoy every practice session and I want to move further. Having small achievements and increased feeling of control of the instrument helps enormously. It is not just “trying the same chords again and feeling frustrated because of lack of progress”, but having different ways to train and spending enough time starts giving results.

In case you’re still in doubt – give it a try, through online course, app or personal teacher (next level for myself). Keep going and try different things. The puzzle will eventually come together. Do NOT expect results on day 2, but just keep getting small “victories” day by day, session to session. This is how I see it now – not a giant leap, but keep steady practice and build upon good examples of other people. It is really worth it!

Let you favorite music always be with you!