If there would be one style I would like to play it would be blues. With my 15-minutes-a-day I am not as fast as I would like to, but after all there are so many things you “have to do” (earning some money to live on is not the least of them!). Hereby a short summary of learnings and “cheat-sheets”.

So the standard 12-bar blues goes like the following:

Where “I” means playing I-chord for 1 bar.

Where I denotes the “root” chord and IV and V are the corresponding chords with the IV-th and V-th root notes. Hereby the “cheat sheet” for the notes:

But there is even an easier way to play this on a guitar neck.

Hereby the diagram including the position on the neck where the commonly played positions of the notes can be found: 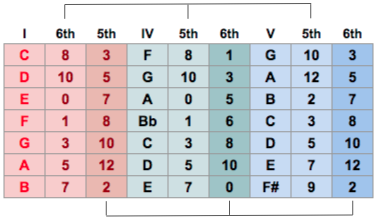 I-chord on the 6th string

So when the I-chord (root note) is on the 6th string:

The root notes of the IV- and V-chords can be easily located by using the following pattern: 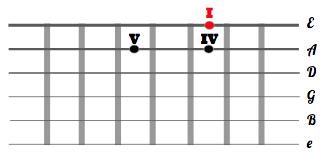 I-chord on the 5th string

When the I-chord is on the 5th string: 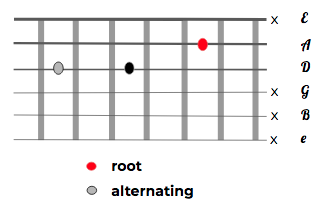 The root notes of the IV- and V-chords can be located by using the following pattern:

Some alternative patterns presented below. The alternations are shown in bold:

Starting with a looper